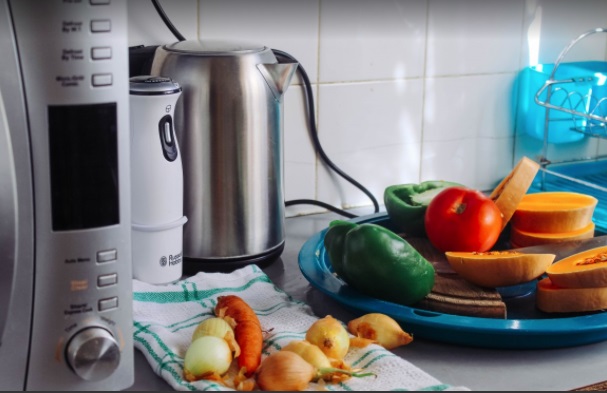 Everybody is juicing these days. All different kinds of juicing machines are selling like crazy.

Some people are turning fruits and vegetables into juice because it is a popular weight-loss plan. The theory is that only drinking juice for a set period of time, perhaps 3 to 10 days, will clean out all the toxins in the intestines and help the person lose weight.

Some people believe drinking juices can reduce cancer risks.  Other people are juicing because it’s a great way to add more vegetables to their diet.  Sometimes it’s hard to sit down and eat a serving of carrots, or kale, or spinach.  But it’s easier to just drink a glass of juice made of various fruits or vegetables.

Many people can’t stand the taste of green beans, or maybe the taste of okra or even peas.  But the taste can be disguised by mixing it with something better in the juicer.

Whatever their reasons, people love to make juice.

Many people think they can just use the blender as a juicer.  It’s possible but it takes more work.  First, the vegetables are processed in the blender until the mixture is smooth.  Then this puree is poured into a cheesecloth-lined bowl.  Then the person has to manually squeeze the mixture until the juice starts coming out the bottom of the cheesecloth bag.

To Buy or Not to Buy

With the high cost of juicers, people wonder if they really should put out the money to buy a home juicer.   This depends on how much the person uses the juicer.

It’s also important to realize that juicers have to be cleaned every time you use them.  At a juice bar, you don’t have that problem.

What to Put in the Juicer

Making juice is not the same as making a smoothie.  The ingredients and the result are far different.  The vegetables that are commonly used when making juice are spinach, kale, beets, cucumbers, carrots, and lettuces.  Some people add parsley or ginger or turmeric.

Some vegetables don’t work well in juices.  Cauliflower and broccoli can cause digestive upset.  Coconut and avocados don’t have enough juice in them to make it worthwhile.  Rhubarb is so fibrous that it can be hard on your juicer.

When they go out to buy their first juice machine, people are surprised to find out that there are several different kinds of juicers.  When looking for a juicer, people will find fast juicers, slow juicers, masticating juicers, cold press juicers, and citrus juicers.

Fast juicers are technically called centrifugal juicers.  Centrifugal means that it spins.  The vegetables are pushed through a tube until they reach a quickly-spinning blade. After it goes through the blade, the juice then goes through a screen into the drinking glass. The screen keeps the pulp from going into the glass.

Slow juicers are also called masticating juicers.  The word masticate actually means to chew.  In a slow juicer, a large auger or screw crushes and pushes the food through a sharp screen.

It’s called a slow juicer because it produces juice much more slowly than regular centrifugal juicers.  Sometimes they are twice as slow.

People who like pulp in their juice will be happy with a slow juicer.  Slow juicers let more pulp come out into the glass.

Slow juicers are good because they produce more juice.  Some people believe that slow juicers produce a juice that has more nutrients than a regular juicer. Slow juicers are able to get juice out of tough vegetables like spinach, kale, celery, and carrots.

A downside for slow juicers is that they are more costly than regular juicers. Also, people who tend to always be late in the mornings will want the quickest juicer they can find.  Lastly, slow juicers are harder to clean.

A cold press juicer is really an industrial-type machine.  It is sometimes called a two-stage juicer.  Produce is fed into the machine. In the first step, the machine chops the food into tiny pieces.  In the second step, a hydraulic press applies thousands of pounds of pressure to the vegetables.  The juice is literally pressed out of the vegetables.

A citrus juicer isn’t a real juicer.  It’s an electric version of the old-fashioned kind where you take a half of an orange and push it down over a domed shaped object.  In this case, the citrus juicer has a dome-shaped bowl; the user puts half of a citrus fruit over the dome and closes the lid.  Then the machine pushes the orange down onto the rotating dome.  This machine can only be used on lemons, limes, grapefruit, and oranges.

Which Incubator or Accelerator to Choose for Your Startup?

Tips for Managing Your Bank Account When You Are Self-Employed

Does The SSA Spy On You After Filing A Claim?